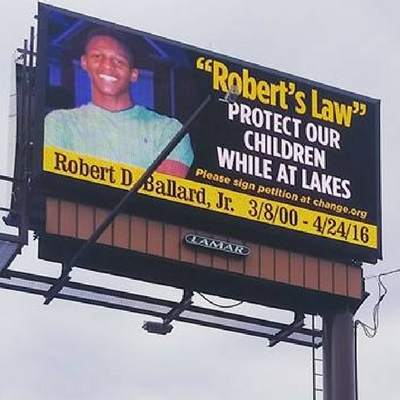 Published on April 28, 2017
On the one year anniversary of his death from accidental drowning, Robert Ballard’s grieving mother Lake-ya Collins is lobbying for a new lake safety law, to prevent more accidental teen deaths in Georgia Lakes.

Ballard who was known and loved as a local football star #29, drowned April 24, 2016, two days after his 10th grade prom; he was swimming at the Lake Springs rec area, when he panicked and drowned.

Collins says her son could swim, but he underestimated the length of the swim, and that resulted in tragedy. “Robert had hopes of playing football for the University of Georgia Bulldogs, and becoming a physician; now all that potential is gone.”

To prevent this type of loss from happening to more families, Collins is campaigning for new laws regulating teen access to lakes for recreational swimming – that teens under 18 must have an adult guardian or chaperone with them to access state lakes, so that there is a “common sense factor” and “voice of reason” in situations when peer pressure can be high.

Collins says “This potential law is very dear and near to my heart, because I can’t imagine one more parent or family enduring the heartache due to something that can be prevented. My hope is to gain more support from national and local lawmakers to prevent these senseless tragedies from occurring across our country. My plans are to brink local arms of organizations such as The Red Cross and coast guards aboard to assist with promoting water safety for our children.”

Collins will be speaking to schools and student organizations this year to educate children & teens about staying safe in the water. Teens are the most at risk group for accidental death and drownings.

Other states with lakes that have cold water also warn teens could drown overestimating their abilities in shockingly cold waters. Additional dangers exist for young swimmers around docks and piers, where lights and other electrical fixtures could electrify the surrounding water.

According to the Center for Disease Control and Prevention, “from 2005-2014, there were an average of 3,536 fatal unintentional drownings (non-boating related) annually in the United States — about 10 deaths per day.”

A change.org petition has been set up to collect signatures of supporters at https://www.change.org/p/georgia-governor-robert-s-law-protect-our-children-from-lakes

Ballard was a 10th-grade student at Greenbrier High School in Columbia County, Georgia. On the day of his drowning, and one year later on the anniversary of his death, friends of the family shared their support and prayers on social media. https://twitter.com/JackOleary13/status/724356316550991872

Get in touch with Lake-ya Collins to offer support for her work to pass Robert’s Law, by phone 706-231-7741 or email lakeya16@yahoo.com